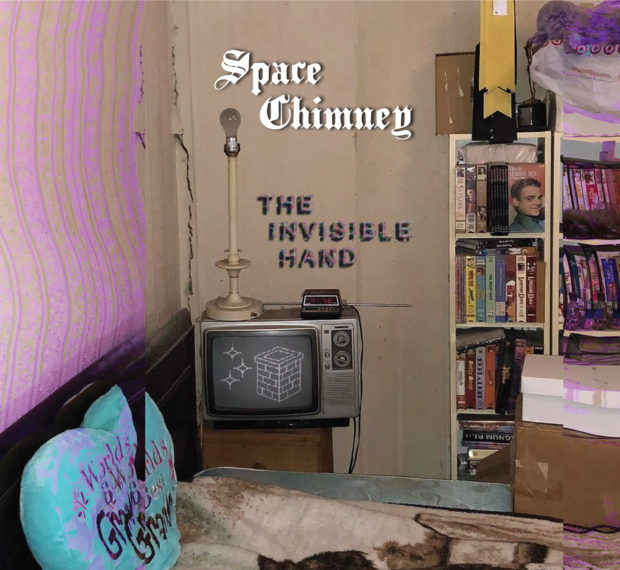 “…as in many other cases, led by an invisible hand to promote an end which was no part of his intention.” Adam Smith, The Theory of Moral Sentiments

Intention in this case was a long road. Five years ago, Justin Vitale Yazdeli of Space Chimney came across a link online to a digital trove of cassette tape rips from K-Marts’ in-store radio. This included promotional announcements, muzak, and laws about where you could smoke. Not knowing when and how these would ever be relevant or useful, he saved the link and passed it from one hard-drive to the next – aware that one day their time would come.

In April of 2019 Justin was in a musical rut, unable to combine his songwriting and production to a point that made sense. He found himself getting over attached to material and hitting the same walls every time. That’s when he remembered the K-Mart tapes…

What would happen trying to write around music that was meant to be forgotten? The unoffensive, corporate approved, background ambience of middle-class shopping from nearly two decades ago – seemed to be the perfect place to lose all sense of care and convention.

The album at its core draws from Justin’s formative years discovering electronic music production and songwriting / playing guitar in Hardcore bands in the early 2000’s. Applying the same attack strategy to writing The Invisible hand – every track had an emotion. The goal was to chase it as far as it would go and as fast as possible. Choosing a K-Mart tape at random, the entire project was constantly mediating on the notion of letting go.

Using samples as the foundation brings an instant nostalgia to the music, expanding the listening experience to touch on the intrinsic human desire for past days. The rosy picture however quickly becomes disrupted by the sonic destruction of the source material and the overt commentary on capitalisms shortcomings. The accompanying music videos for the album amplify the criticism by taking K-Mart commercials, training videos, and home footage to present a distorted and frenzied world.

The lines between the samples and Justins’ instrumentation often become blurred, leaving the listener to pass through a wide range of feelings. Aggressive, introspective, campy, retro, and psychedelic overtones build a wide palate of auditory adventure. The Invisible Hand explores the freedom of experimentation without judgment.

As the release drew closer, there was the inevitable issue that Justin had tried to ignore – the samples. Was it legal? Is this a right thing to do?

“Morals, ethics, and laws are a funny thing. Someone else is always choosing them for you. I have chosen to make art without restriction, as it is my belief that any hinderance on such is ultimately a deprivation to humanity. My goal is to make people happy, inspire new lines of thought, and promote self-reflection.”